Vitalant officials see a 12% decline in new donors over this past year.

After second grade teacher Katie Bolger, a 34-year-old Centennial resident, read an article about a critical need for blood donations and learned there would be a community blood drive July 1, she …

Vitalant officials see a 12% decline in new donors over this past year.

About Curate: A Local Mercantile

Before owning Curate: A Local Mercantile, Karli Millspaugh was a vendor for the store, selling items like antique furniture.

The store first opened in 2013 and was formerly named “Unlisted Market,” according to the store’s website. Millspaugh became a co-owner in 2017 before becoming the sole owner of the store in 2019.

“Our mission is really to connect the community to all of the local makers and creators and vendors in the area,” Millspaugh said. The products sold are not necessarily made in Colorado, but all the vendors who sell the products are local, she said.

Curate: A Local Mercantile was named as one of the best gift shops in Centennial in Colorado Community Media’s 2022 Best of Centennial list.

After second grade teacher Katie Bolger, a 34-year-old Centennial resident, read an article about a critical need for blood donations and learned there would be a community blood drive July 1, she felt it was important to show up.

“There’s always a need,” Bolger said about blood donations. “You never know, you know, when you or a family member might be in need of blood.”

About 10 years ago, Bolger’s sister-in-law fell asleep at the wheel and drove off the road. The seatbelt severed her arm. Thankfully, a trauma nurse was in the car behind her and was able to provide assistance until help arrived.

“She lost a lot of blood, and she almost died,” Bolger said. “But luckily, people had donated.”

The community blood drive was hosted by Centennial store Curate: A Local Mercantile, which helps sell the products of local artisan and boutique vendors. The shop partnered with Vitalant, a national nonprofit that hosts about 60,000 blood drives annually, to host the blood drive in a Vitalant bloodmobile parked near the shop, located at 8242 S. University Blvd.

“We wanted to do something for the community. We’re always looking for events that draw people together,” said store owner Karli Millspaugh. “This was sort of a natural extension of just ways for people to give back, especially given the blood shortage right now.”

Vitalant announced a critical blood shortage in a June 14 news release. In April and May, Vitalant collected about 13,000 fewer blood donations compared to the year prior, the organization said.

“Right now, we’re at half of the desired four-day supply of every blood type,” said Brooke Way, the communications manager of Vitalant. “We just need more people coming in regularly.”

Recently, there have been fewer blood drives, in part, due to COVID-19 limitations and people traveling during the summer, Way said. Vitalant is also facing a staffing shortage, resulting in fewer blood drives because there aren’t enough staff to work them.

“We want to avoid a critical shortage at all costs, because we want to make sure patients get what they need when they need it,” Way said. She doesn't want doctors to have to decide whether or not they can give a patient what they need due to a limited supply of blood, she said. 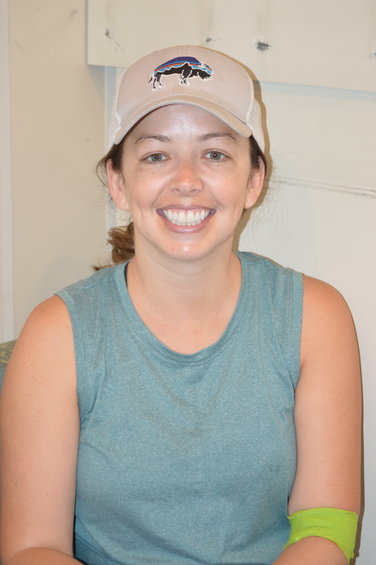 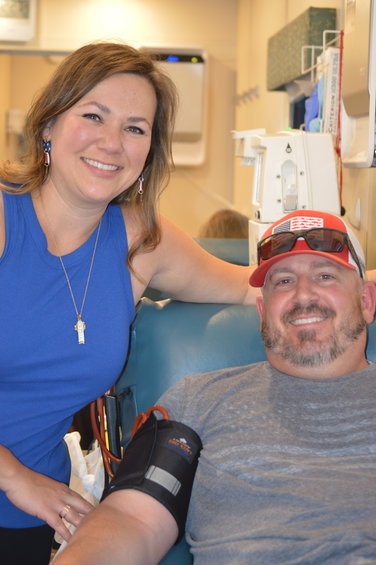 Karli Millspaugh and Brent Millspaugh on July 1, 2022, in the Vitalant bloodmobile. 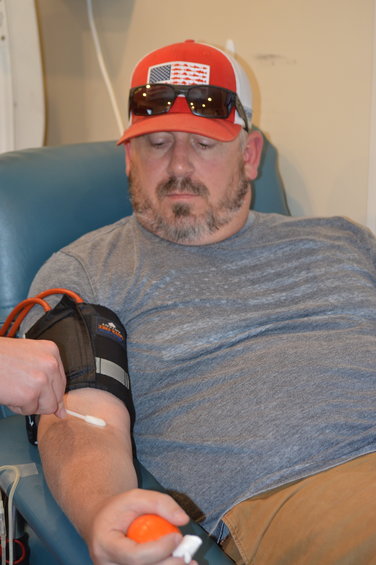 Brent Millspaugh was one of the 22 people who signed up to donate blood on July 1, 2022, in the Vitalant bloodmobile. 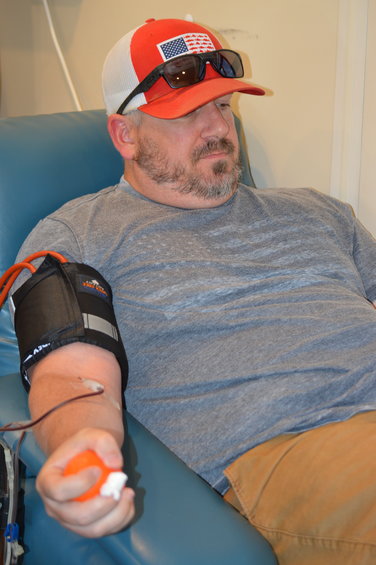 Brent Millspaugh donating blood on July 1, 2022, in the Vitalant bloodmobile. 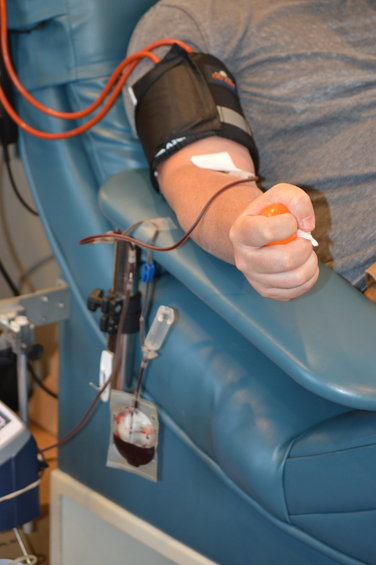 Brent Millspaugh donating blood on July 1, 2022, in the Vitalant bloodmobile.
Previous Next

Karli Millspaugh’s husband, Brent Millspaugh, was among the 22 people who signed up to donate blood. When he posted on social media about the upcoming blood drive, one of his former high school classmates responded and said he had to have a blood transfusion at one point and thanked Brent Millspaugh for helping.

“You don’t realize how many people actually need that,” Brent Millspaugh said. “I’m happy to do it.”

Centennial resident Sally Leibbrandt, 62, tries to donate blood every eight weeks, she said. She found out about the blood drive while searching on Vitalant’s website for nearby blood drives.

“There’s a need for blood continually and especially during COVID,” she said. “I just feel like it’s the easiest thing I can do to help.” 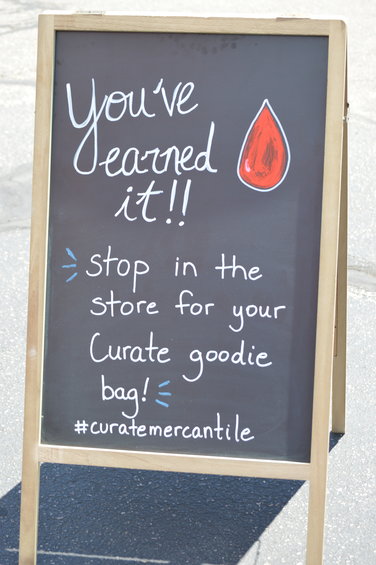 A sign placed outside the Vitalant bloodmobile on July 1, 2022. After completing their appointment, donors could grab a complimentary bag filled with products from the store. 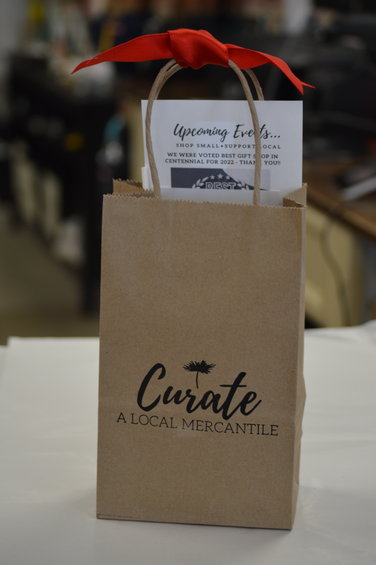 The complimentary bag that donors received on July 1, 2022.
Previous Next

After completing their appointment, donors could grab a complimentary bag filled with products from the store. Vitalant is also offering rewards to donors, such as a $5 prepaid gift card to those who donate between July 10-20 and a chance to win one of three, $3,000 prepaid gift cards.

The rewards aim to attract more donors, especially given that over the past year, Vitalant has seen a 12% decline in new donors, Way said, calling it a worrisome trend.

“We’re so grateful for these coordinators, like the mercantile, that are putting on drives in their community,” Way said. “Everyone’s there for the same cause, the same reason: to save someone’s life. And it’s just a fun way to be involved in your community and feel like you’re truly doing something that will change and transform someone’s life.”

Those interested in scheduling a blood donation appointment can find more information online at Vitalant.org or by calling (877) 258-4825.

Project aims to identify unmarked graves
On a recent summer morning at the Franktown Cemetery, Carole Taylor spoke to a small crowd gathered to honor Ozro Brackett, who was buried there in 1889. The ceremony was part of a larger effort …

Colorado Community Media taps de Yoanna as new editor-in-chief
Colorado Community Media announced today that it has named Michael de Yoanna as its new editor-in-chief.
Parker establishes first-ever youth commission
Nine Parker area teens will now have an opportunity to represent the desires of local young people after the town council formed a youth commission Sept. 19 The students each needed to have at …