Development is part of RidgeGate East, construction to begin in October

Construction for a 206-unit senior living residential building that reaches up to nine stories is slated to begin in October in Lone Tree.

The development, called “The Reserve at Lone …

Development is part of RidgeGate East, construction to begin in October

The Reserve at Lone Tree is a 206-unit senior living residential building that reaches up to nine stories.
Image courtesy of City of Lone Tree
Posted Monday, August 22, 2022 9:59 am
Tayler Shaw
tshaw@coloradocommunitymedia.com

Construction for a 206-unit senior living residential building that reaches up to nine stories is slated to begin in October in Lone Tree.

The development, called “The Reserve at Lone Tree,” will be located south of RidgeGate Parkway at the southeast intersection of South Havana Street and High Note Avenue, according to a City of Lone Tree staff report.

This project will be in the Lone Tree city center area of the RidgeGate East development, located on the east side of I-25 and RidgeGate Parkway. According to the sub-area plan, the city center is approximately 440 acres. The property for the senior living facility is about 4.5 acres, according to the staff report.

It will be located near the RTD RidgeGate Parkway Station and two apartment complexes currently under construction: Talus Affordable Housing and RidgeGate Station Apartments.

The developer of the project is Experience Senior Living, which builds and manages senior living communities and is a division of the national real estate investment and development company, NexCore Group.

“This is an exciting opportunity for us,” said Bill Maggard, a senior vice president at Experience Senior Living. He said the company started working on the plans over a year ago. 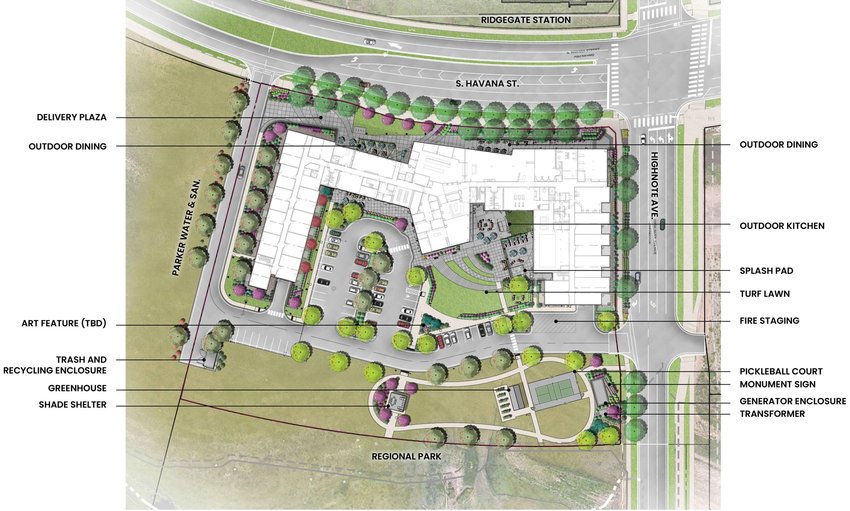 Development plan for The Reserve at Lone Tree. 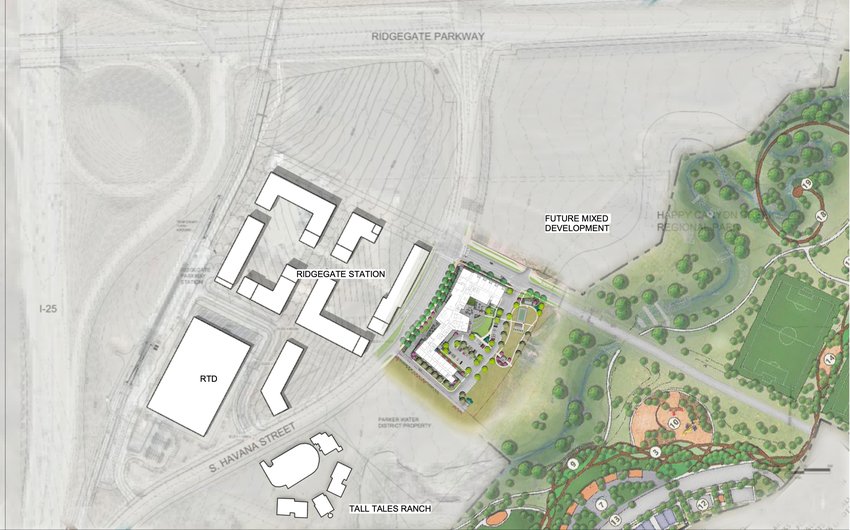 Map of location for The Reserve at Lone Tree.
Previous Next

According to the staff report, the development will be one building that has three individual components varying in size.

The southern portion will be five stories high and contain a combination of assisted living units and memory care units. According to MemoryCare.com, memory care facilities are intended to provide long-term care for people with Alzheimer’s disease or another form of progressive-degenerative dementia.

Connecting the northern and southern portions will be a two-story high building that will contain administrative offices, food preparation areas and other operational uses, according to the staff report.

“Our whole philosophy is that when folks, residents, come into our communities, they’re going to be building new connections, new social relationships,” Maggard said.

Maggard said the company did an internal data analysis to understand the demand for senior living and checked it with CB Richard Ellis, a commercial real estate services and investment firm. The analysis found the under-supply of independent senior living units exceeds 900 units in the community, and by 2026, the deficit will exceed 1,000 beds, he said.

“So, we’re scratching the surface,” Maggard said. “But for us to do all the things we need to do to provide the open space that we need, the plazas — all those things that support the vision of the sub-area plan — we need the nine-story variation.”

The property will have 156 parking spaces, with 102 spaces located in an underground parking garage, according to the staff report. Maggard said electric vehicles will have 10 charging stations in the parking garage.

“One of our challenges in our industry, not just Experience Senior Living but — is staff retention. And so that proximity to light rail is going to be very important for us, and families are going to use it, too,” Maggard said. 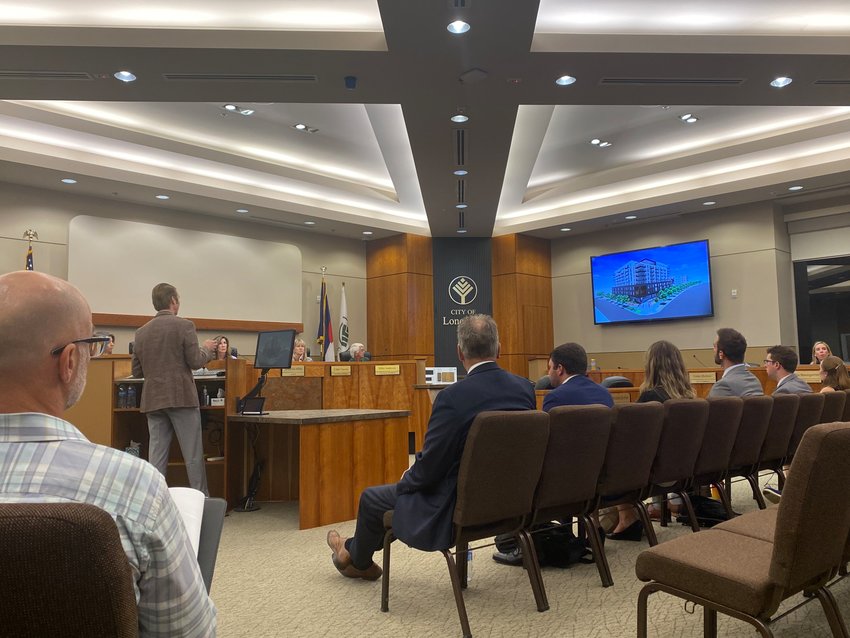 A public hearing for the proposed development was held Aug. 2, 2022, as part of Lone Tree City Council's meeting.

During its Aug. 2 meeting, a few members of Lone Tree City Council expressed concerns over the nine-story portion of the building, but ultimately they did not feel the concerns were reason enough to deny the application.

“There is a part of me that’s concerned that this is going to look like a thumb sticking up in the middle of an area,” Mayor Jackie Millet said. “But I can’t disagree that it does conform to what the vision is for our community. The need is absolutely there for the housing.”

According to the report, staff found the development application was in “general conformance” with the city’s regulations, standards and guidelines, meaning the development plans were compliant with a majority of them.

However, the nine-story height did exceed the recommendation of the zoning district, which is a “mixed use commuter station district” or “MU-3.” Chuck Darnell, the city’s senior planner, said the city center sub-area plan provides a suggested building height of three to five stories in this type of district.

“It should be noted that the overall RidgeGate PD does allow a taller maximum building height of up to 360 feet. And there are some other districts in the city center that allow taller building heights, up to 10 stories,” Darnell said. “The nine-story portion of the building is proposed to be about 106 feet in height.”

Darnell said the nine-story portion will make up about 43% of the building footprint.

He noted that due to the change in the slope, also called a grade, of the property, “there will be some other developed areas, both to the south in the Southwest Village and to the west across I-25 in some existing developed areas, that are at a higher grade than the tallest portion [of] this building would be.”

The Southwest Village is one of the residential developments occurring in RidgeGate East, which will include more than 1,800 homes, according to the city’s website. 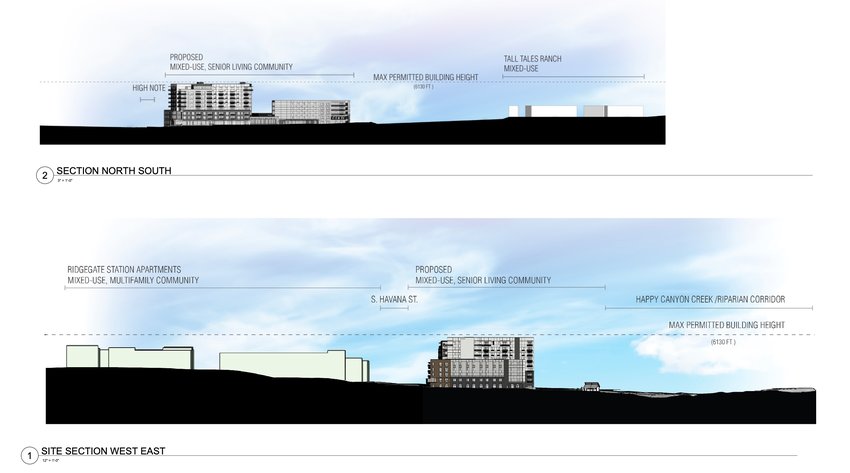 The Reserve at Lone Tree development in comparison to other nearby developments, such as RidgeGate Station Apartments and Tall Tales Ranch.

Darryl Jones — the senior vice president of Coventry Development Corporation, which is the master community developer for the RidgeGate mixed use community — said Coventry is supportive of the project.

“Our effort has been to try and encourage development that really moves more multistoried projects closer to the light rail station,” Jones said, adding that he thinks it’s a more efficient use of land. “It will really provide a very attractive building at that corner and help anchor that corner.”

One of the concerns Millet expressed was how the building may cast shadows and cause potential issues with road maintenance, snow removal and the freeze-thaw cycle. She also said she worried about the visual aesthetic of the building height.

“The shadows do concern me, and what’s going to happen on the adjacent parcel concerns me. I’m not going to penalize you for those concerns, but as I look to the next project across the street, I’m going to wonder how that is going to fit in with the context of this nine-story building,” Millet said. “To see something on a much lower level is going to be concerning to me.”

Councilmember Marissa Harmon said she worries about the property sticking out like a thumb and the potential impact of shadows, especially on the roads. However, she also said she thinks the city’s guidelines have been met.

“I don’t think it would be enough to say no,” Harmon said about the height concerns.

Councilmember Cathie Frazzini said the property is a “glorious looking building” that she would be proud to have in Lone Tree.

“I’m weighing how important this kind of housing is in our region, and that as we move to density, higher density, in this location, we’re all going to struggle a little to get our head around how it’s going to look,” Frazzini said. “I’m in favor of the project and in favor of the work that you’ve done to make it really spectacular for us.”

Multiple council members also said they liked that the property incorporated some open recreational space to help transition into the Happy Canyon Creek corridor and future regional park that is located to the east of the development.

Councilmember Mike Anderson said he was initially concerned about the height, but after hearing from the developers and seeing the plans, in combination with the need for senior living facilities and how the property opens up to the open space, he supported the development.

“This building is beautiful, and this density, I’m actually fine with. It’s what’s around it, is my concern,” Millet said, noting the city should reassess the three to five-story building height recommendation.

“Perhaps, as long as we can deal with the parking, this area can support more density. It is something that should be happening near our light rail stations, and it does make sense,” Millet said.

Council unanimously voted to approve the development, which has an anticipated opening date of November 2024. To learn more about the development, visit: cityoflonetree.com/projects/the-reserve-at-lone-tree/.

1 killed, 1 injured in Castle Rock shooting after fight
An overnight shooting left one person dead and another injured, and police have taken the suspect into custody, the Castle Rock Police Department said.

Castle Rock mayor muses on next term
Heading into his second term as Castle Rock’s mayor after running uncontested, Jason Gray feels confident voters are supportive of his model of “growth with vision” when it comes to …

How a Democrat won in Douglas County
Flipping the historically Republican Colorado House District 43 came down to a dedicated door-to-door campaign effort and a platform derived from listening to voters’ concerns, its …